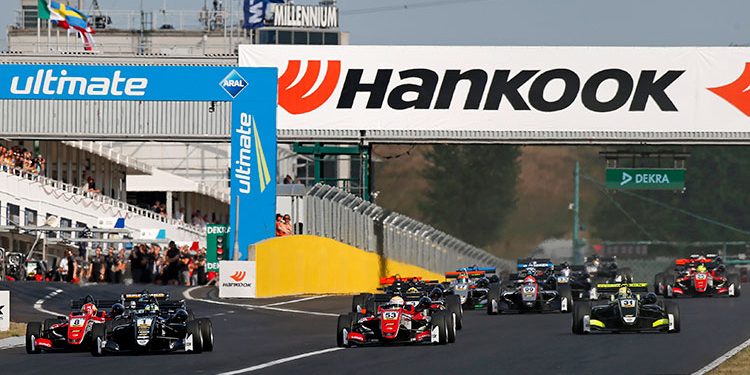 Following the FIA Formula 3 European Championship season kick-off held at the street circuit of Pau, Southern France, in mid-May, the young drivers now travel to the Hungaroring for the second race weekend of the still short season. The 4.381-kilometre F1 circuit located not far from Hungary’s capital Budapest will stage the fourth, fifth and sixth race of the season. Guanyu Zhou and Ralf Aron (both PREMA Theodore Racing) have got more F3 experience at this circuit than all the other drivers as they both make the trip to race weekends with FIA Formula 3 European Championship in Hungary for the third time.
Ralf Aron arguably has the fondest memories of the Hungarian GP circuit. The Estonian won two years ago at the circuit that was opened in 1986 and finished second in one of the other races. His Chinese team-mate, Ferrari Junior Guanyu Zhou, came third in one of last year’s Hungary rounds – and Jehan Daruvala (Carlin) also could take part in an FIA F3 European Championship podium ceremony in Hungary. The Indian supported by the Force India Formula One Team secured a third place in 2017.
In Pau, Aron, Zhou and Daruvala also made a successful start into the 2018 season. While Daruvala clinched a third place, Zhou and Aron both won a race. But not only the experienced drivers succeeded in shining at the traditional and challenging street circuit at the foot of the Pyrenees. The rookies also delivered in great style. With Sacha Fenestraz (Carlin), Marcus Armstrong (PREMA Theodore Racing) and Enaam Ahmed (Hitech Bullfrog GP), three of the newcomers made it to the podium of one of the races. Thanks to his win in round two, Frenchman Fenestraz even travels to Hungary as championship leader. But he can’t rest on his laurels as Aron follows just 2.5 points behind.
Ralf Aron (PREMA Theodore Racing): “It feels great to return to the venue of my first FIA Formula 3 European Championship triumph – and even more so as I really like the Hungaroring. As usual, it’s my goal to squeeze the maximum out of myself and my car. Should I again succeed in doing so I’m confident to be able to clinch the championship lead. I also had high expectations for the Pau weekend and was delighted with having won a race. The only downer was the fact that we were awarded only half the points as the race was stopped early due to the rain. But that’s just an additional motivation for scoring full points in Hungary.”