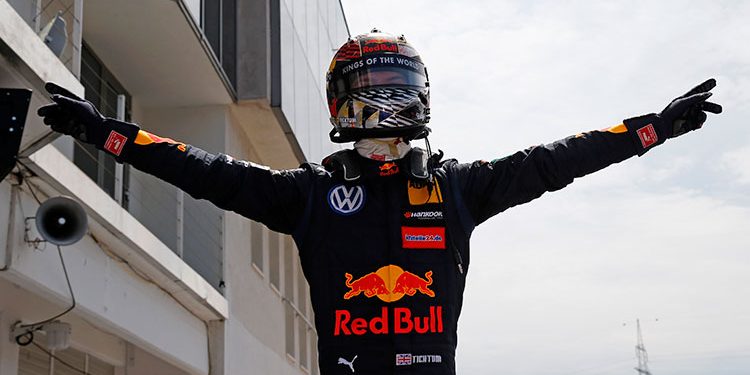 Daniel Ticktum started from pole-position, but briefly had to hand the lead to Marcus Armstrong (PREMA Theodore Racing) after the start. After a duel between the two, the Brit moved up to the front again. In his slipstream, Ralf Aron (PREMA Theodore Racing) was in second place while Guanyu Zhou was third as he returned from the opening lap.

On lap two, Ferdinand Habsburg (Carlin) also came into the pits after a duel with Robert Shvartzman in which the Austrian lost his fourth place to the Russian rookie. One lap later, Jonathan Aberdein (Motopark) spun on the track that was still partly damp and dropped out of the top ten.
As the race went on, Ticktum gradually extended his lead to over five seconds while his rival Aron incurred a five-second time penalty from the stewards for a jump start. After the race, this was added to the Estonian’s race time. As a result, the winner of the Grand Prix de Pau was classified fifth. Ahead of Aron, Zhou, Shvartzman and Mick Schumacher (PREMA Theodore Racing) occupied second to fourth place while Jüri Vips (Motopark), Enaam Ahmed (Hitech Bullfrog GP), Sacha Fenestraz (Carlin), Ben Hingeley (Hitech Bullfrog GP) and Fabio Scherer (Motopark) followed in sixth to tenth place. Fenestraz had come to the Hungaroring as the FIA Formula 3 European Championship points’ leader.
Daniel Ticktum (Motopark): “I am happy, because unlike at Pau, I managed to turn pole position into a race win. In pre-season testing a couple of weeks ago, we were already fast here and my car was also fast in yesterday’s qualifying. In the race, the first few laps were difficult, because the track was still partly damp. About the duel with Marcus Armstrong on the opening lap, I can only say that I was on the racing line and he tried to overtake me. Then, he got onto the damp part of the track and touched my front wing. I was innocent in this contact.”
Guanyu Zhou (PREMA Theodore Racing): “At the start of the race, the track was still slightly damp. Moreover, many of my teammates were around me, so I was particularly careful. After all, you don’t want to collide with a team partner on the first few metres. Throughout the weekend, my car has been really good and I am happy with second place.”
Robert Shvartzman (PREMA Theodore Racing): “As my grid position was on the damp side of the track, I lost two or three places at the start. I then braked early for the first corner and chose the inside line, allowing me to gain positions. In the second corner, things also went well for me. All in all, I am happy with third place.”