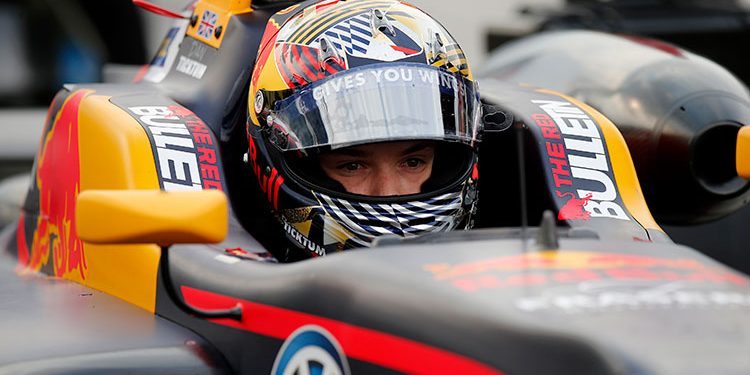 In first qualifying of the FIA Formula 3 European Championship at the 4.381 kilometres long Hungaroring, nobody was faster than Daniel Ticktum (Motopark, 1m35.275s). In summerly temperatures near the Hungarian capital, Alex Palou (Hitech Bullfrog GP, 1m35.307s), Guanyu Zhou (PREMA Theodore Racing, 1m35.377s) and Mick Schumacher (PREMA Theodore Racing, 1m35.412s) were next up behind the Red Bull-backed Brit. The best-placed rookie, Marcus Armstrong (PREMA Theodore Racing, 1m35.489s) was classified fifth. In total, the lap times of the first 16 drivers were within one second.
Daniel Ticktum waited for a long time before driving his first fast lap. With four minutes remaining, he ranked fourth, but moved up into the lead two minutes before the end of the session. Shortly after that, Alex Palou mounted a challenge to beat the fastest time of the Motopark driver, but the Spaniard eventually had to make do with second, 0.032s down on the Brit.
Palou ended up ahead of a quintet of PREMA Theodore Racing drivers who were in third to seventh place. In a qualifying that had no lack of action, Chinese driver Guanyou Zhou was the best-placed driver of the Italian team. With three minutes left, he was still in first place. Mick Schumacher ended up fourth from the two rookie drivers Marcus Armstrong and Robert Shvartzman (1m35.522s). Next up behind the two Ferrari juniors, Ralf Aron, (1m35.679s), the winner of the Grand Prix de Pau three weeks ago, was classified seventh.
Rookie Jonathan Aberdein (Motopark, 1m35.789s) secured eighth place on the grid for the fourth race of the current FIA Formula 3 European Championship season from Enaam Ahmed (Hitech Bullfrog GP, 1m35.943s) and Jüri Vips (Motopark, 1m36.110s).
Daniel Ticktum (Motopark): “This pole position is a good start of the weekend. Now, I hope that I can make more of it this time than at Pau, where I finished third after starting from first place on the grid. At the Hungaroring, a good grid position is crucial and for the first race, I have achieved that. Now, I am focussing on the start, because I want to be first into the first corner. For the race, I am optimistic, our car is very good here.”