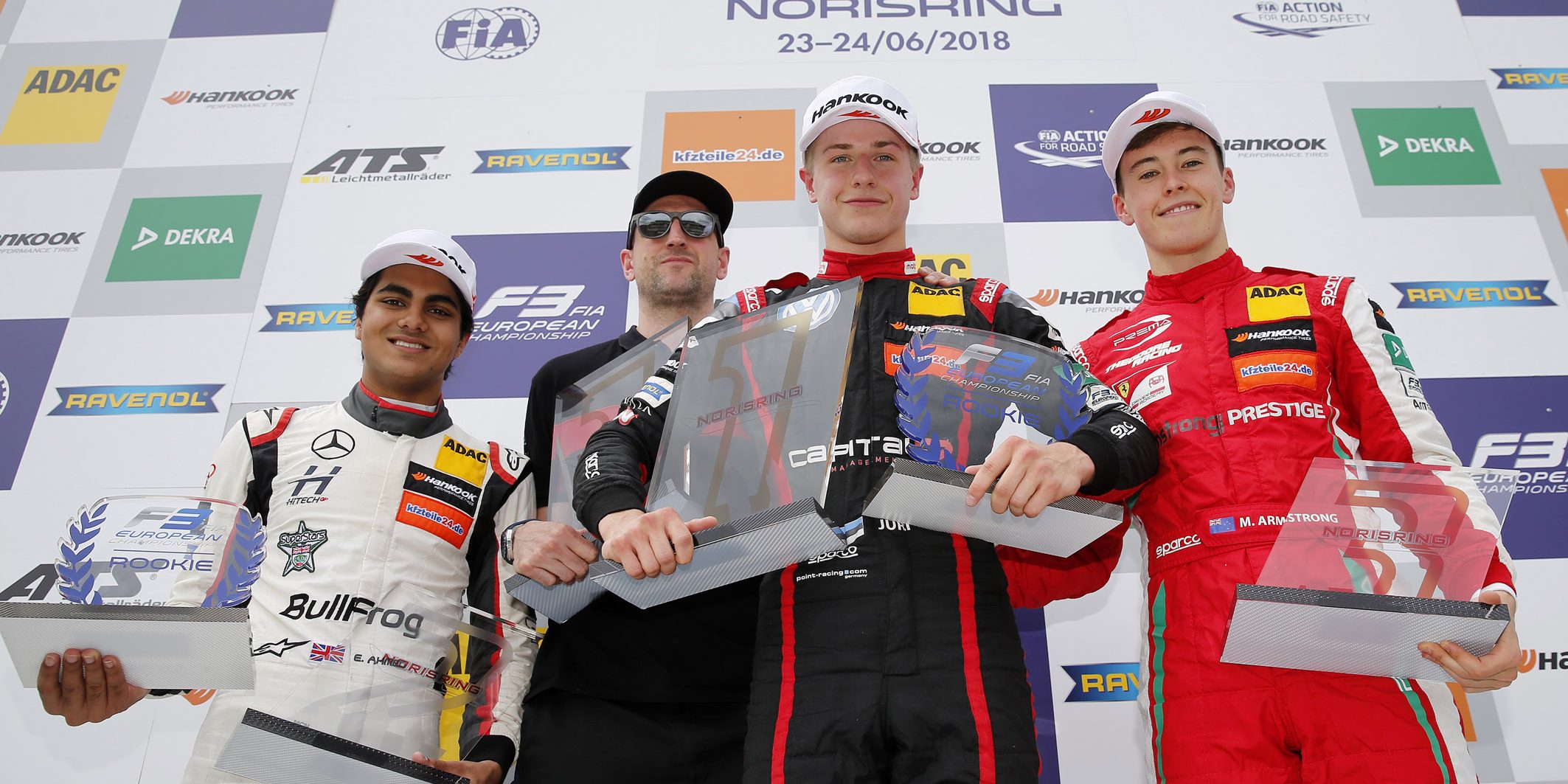 At the 2.3 kilometres long Norisring, two rookie drivers ended up front in the eighth race of the FIA Formula 3 European Championship season: Jüri Vips (Motopark) won from Marcus Armstrong (PREMA Theodore Racing). Third place went to Keyvan Soori Andres (Van Amersfoort Racing). For Estonian driver Vips, it was his maiden FIA Formula 3 European Championship race win while Soori Andres claimed his maiden podium finish in the series. Thanks to his fourth podium finish of this year, Armstrong takes the lead in the FIA Formula 3 European Championship drivers’ standings.
At the start, Ameya Vaidyanathan (Carlin) was unable to avoid the stalled car of Daniel Ticktum (Motopark) and ran head-on into the rear of the Motopark Dallara. Both drivers got out of their cars unaided, race control interrupted the race immediately with the red flag. Seconds before the flags flew, Robert Shvartzman (PREMA Theodore Racing) also came to a halt following a battle with Enaam Ahmed (Hitech Bullfrog GP).
After a little bit more than 15 minutes, the field completed two laps behind the safety car before racing resumed at the Norisring. Fourth-placed Keyvan Soori Andres (Van Amersfoort Racing) found himself under pressure from Ferdinand Habsburg (Carlin), but defended his position. The Austrian, in turn, locked up under braking on lap 23 and lost his fifth place to Alex Palou (Hitech Bullfrog GP).
Out in front, things weren’t any less exciting. Enaam Ahmed, who was leading at the restart, had to defend his position from a charging Jüri Vips. On lap seven, Vips found a way past the Brit and then brought an undisputed victory home. Ahmed took the chequered flag in second place, but was given a 20 seconds’ time penalty due to the collision with Shvartzman and dropped back to 15th as a result. Thus, Marcus Armstrong inherited second place from Soori Andres, Palou, Habsburg, Jehan Daruvala (Carlin), Marino Sato (Motopark), Sacha Fenestraz (Carlin), Mick Schumacher (PREMA Theodore Racing) and Fabio Scherer (Motopark).
Jüri Vips (Motopark): “I am really happy with this victory, especially as I first had to make it to the front. Especially the duel with Enaam for the lead was great fun. The Norisring is a track at which you can fight for positions like this, something I enjoyed. The interruption was no problem for me. Together with my team, I prepared for the start behind the safety car.”
Marcus Armstrong (PREMA Theodore Racing): “I reckon that Enaam and Jüri had a more exciting race than I did. Nevertheless, I am happy with second place, because it gives me many valuable points.”
Keyvan Soori Andres (Van Amersfoort Racing): “I was already really happy with fourth place, but obviously, third position is even better. Too bad that I wasn’t able to step onto the podium, but I can live with that. So far, the weekend has been great anyway: I scored my first FIA Formula 3 European Championship point yesterday and I was sixth in second qualifying. And today, things are going even better.”