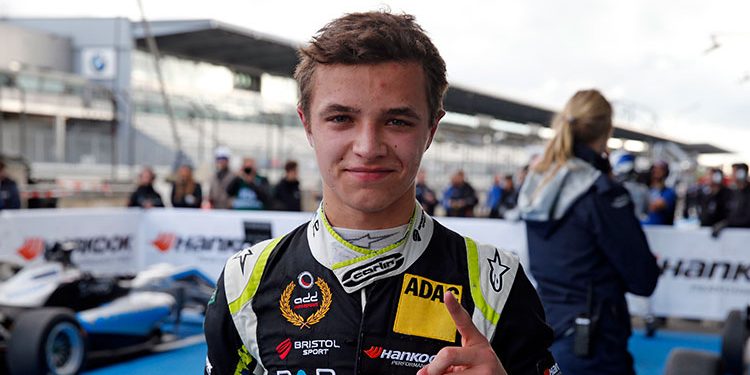 Right after the Spanish GP contested at Barcelona, Formula One held three days of testing at Barcelona’s Circuit de Catalunya. And three young guns that raced in the FIA Formula 3 European Championship also were offered the opportunity to demonstrate their skills at the pinnacle of motor racing: reigning FIA F3 European Champion Lando Norris (UK), his compatriot Jake Dennis and Russia’s Nikita Mazepin.
Lando Norris was active on both days of the two-day tests. On day one, the official McLaren test and reserve driver finished 10, on the second day he set the third-fastest time. “It’s been a good, enjoyable couple of days and it was cool to drive the new McLaren for the first time in a proper test. It was a Pirelli test and it all went smoothly. We can’t touch the car in any way, we have to leave it exactly how we start the test. So there’s a lot of time for me to try different things for myself but at the same time trying to feel the differences in the different tyres Pirelli give us,” Lando Norris explained. “Today was a McLaren test with the new nose. I found positive differences when compared to last year’s McLaren, it’s definitely a step forward. Jumping from an F2 car to drive an F1 McLaren is a big step which takes time to get used to but the new car was good to drive and gave me confidence to push in the high-speed corners. I didn’t reach the limit myself, there’s still more I need to squeeze out of it but that will come with more miles.”
Jake Dennis, simulator driver for Team Aston Martin Red Bull Racing, also came to a positive conclusion after having finished 11th in first test in an F1 car, on day two. “My first day in the RB14 went really well. Obviously it’s a big step up from what I’m used to in GT racing but I got used to the speed and the grip quite quickly and we managed to get through the whole plan. The morning session went pretty smoothly and then in the afternoon I managed to get quite a few laps under my belt, which was good. It was nice to change a few things to give me a proper representation of the difference between the simulator and real life. So we have a few things to work on back in Milton Keynes to help Max and Daniel and make it even more realistic for them. But overall, super happy, a big thanks to the team for giving me the opportunity, and hopefully I’ll be back in the RB14 soon.”
Like Dennis, Nikita Mazepin, 10th in the 2017 FIA Formula 3 European Championship, contested the second of the days of testing – to finish fifth. “It’s always a pleasure to be in the car and, as always, I have tried to deliver the best job I could in the most professional way. The conditions are very different compared to the last time I drove the VJM11 during the winter. The car feels so much better now and from the first moment I could feel the positive step the team made. I had my reference points from my work in the simulator so it wasn’t all new for me, but it still felt much more consistent and easy to drive compared to pre-season testing. Our programme today included a mix of long and shorter runs working mainly on the softs and hypersofts. We had a small issue in the morning that prevented us from running as much as we would have liked, but we were able to catch up in the afternoon,“ Mazepin said.