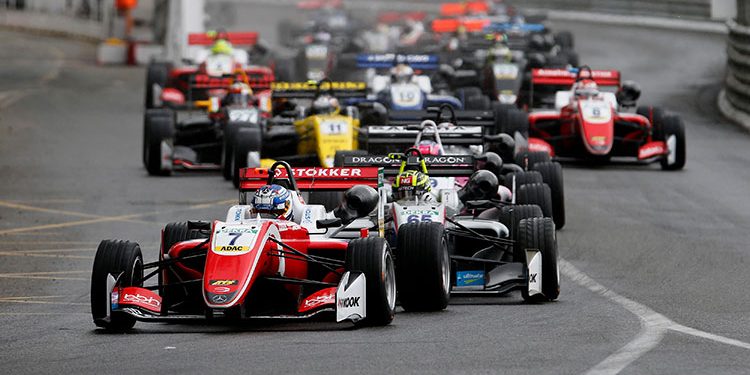 Ralf Aron (PREMA Theodore Racing) is the winner of the third FIA Formula 3 European Championship race at the 2.76 kilometres long street circuit of Pau. In a race that was stopped early due to heavy rain, he finished ahead of rookie Enaam Ahmed (Hitech Bullfrog GP) and Jehan Daruvala (Carlin). As the third race was officially designated as the ‘Grand Prix de Pau’, Aron’s name was added to the winners’ list that includes ex-Formula 1 stars Juan Manuel Fangio, Jim Clark and Jackie Stewart. Sacha Fenestraz (Carlin), who opted for slicks and finished 20th in this race, remains in the lead of the FIA Formula 3 European Championship drivers’ standings.
In pouring rain, Ralf Aron managed to take the lead at the start while Enaam Ahmed, who had started ahead of him from pole position, slotted into second place. The latter’s teammate Alex Palou (Hitech Bullfrog GP) wasn’t able to benefit from his second grid position. He dropped out of the top ten after a weak start. As he hadn’t lined up correctly on the starting grid, he also was given a drive-through penalty after three laps.
On lap eight, Marcus Armstrong (PREMA Theodore Racing) and Ferdinand Habsburg (Carlin) collided, after which the safety car was deployed. At that time, the order at the wet track on the streets of Pau was: Aron, Ahmed, Jehan Daruvala, Fabio Scherer (Motopark), Daniel Ticktum (Motopark) and Robert Shvartzman (PREMA Theodore Racing).
The race was interrupted with the red flag on lap twelve as rain intensified. Conditions didn’t improve in the minutes that followed, so race control decided that the race wouldn’t be resumed. Thus, Aron won the prestigious Grand Prix de Pau while Ahmed and Daruvala accompanied the Estonian on the podium. Scherer, Ticktum, Shvartzman, Mick Schumacher (PREMA Theodore Racing), Jonathan Aberdein (Motopark), Ben Hingeley (Hitech Bullfrog GP) and Marino Sato (Motopark) rounded out the top ten.
Ralf Aron (PREMA Theodore Racing): “Having won the Grand Prix de Pau means a lot to me, particularly so as I really like street circuits. In the wet second qualifying, we were still having problems, but my team solved them overnight and today, I had a really great car at my disposal. Our eventual choice for rain tyres turned out to be the right call. Too bad that only half the points are given as I think we would have deserved the full number of points as well. But that is what the regulations are like. Otherwise, I am very happy and proud of our achievement.”
Enaam Ahmed (Hitech Bullfrog GP): “Ralf’s start simply was better than mine and he zoomed past me. Then, I was able to follow him and I think that we were the fastest drivers in the field at times. I am really delighted to have scored a podium finish already in my first weekend of racing in the FIA Formula 3 European Championship. Here, I am up against the world’s best junior drivers and now I am bringing a pole position and a podium result home, that is really great.”
Jehan Daruvala (Carlin): “At the start, I was able to move up from fifth to third place. Initially, the two drivers in front of me were faster and were able to pull a gap. Later on, I made a mistake: I hit a kerb and from then on, I was afraid that my suspension could break. That had happened to me in the first race already and it was always in the back of my mind. Therefore, perhaps it was good for me that the race was stopped, because nobody was able to take third place away from me.”