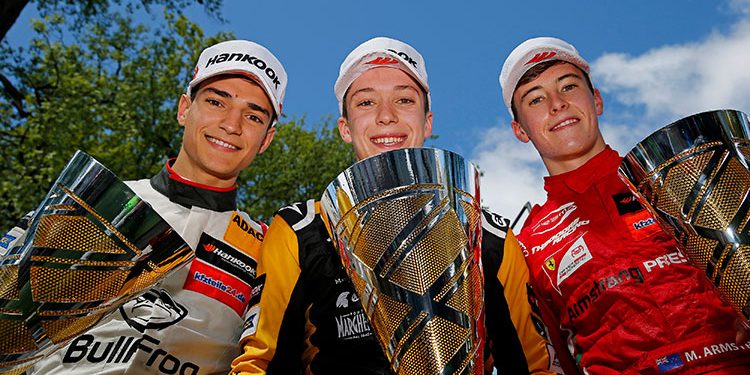 Frenchman Sacha Fenestraz (Carlin) had already been successful at the 2.76 kilometres long street circuit of Pau. However, this weekend marked his first weekend of racing a Formula 3 car at the track on the narrow streets in the city in the south of France. That did by no means prevent the junior driver who is backed by the Renault Formula 1 team from winning the second race of the FIA Formula 3 European Championship season. Behind rookie driver Fenestraz, Alex Palou (Hitech Bullfrog GP) and Ferrari junior Marcus Armstrong (PREMA Theodore Racing) were next across the finish line. With his victory, Fenestraz also moved up into the lead of the FIA Formula 3 European Championship drivers’ standings from Guanyu Zhou (PREMA Theodore Racing). The winner of yesterday’s race had to make do with twelfth place today.
Sacha Fenestraz made the best use of his pole position and took the lead at the start. Behind him, Fabio Scherer (Motopark) and Alex Palou slotted into second and third place. The opening minutes of the race were comparatively quiet until Devlin DeFrancecso (Carlin) and Artem Petrov (Van Amersfoort Racing) collided on lap five, after which the safety car was deployed.
Racing resumed on lap eight with Fenestraz defending his lead at the restart against a charging Scherer. Initially, the positions behind him also remained unchanged. Scherer kept his head down and from lap ten onwards, he started attacking the leader again. At that point, a slight drizzle set in as well. On lap 14, there was contact between Scherer and Fenestraz, but it didn’t lead to major damage on any of the cars. As a result of the incident, the Frenchman even extended his lead from the Swiss to over one second while Scherer had to keep Palou at bay. A little bit later, the Team Motopark rookie driver slid into the barriers, which put an end to his race.
In the remainder, nobody was able to endanger Fenestraz’s lead and after 27 laps, he celebrated his maiden FIA Formula 3 European Championship race win. Palou took the chequered flag in second place from Armstrong, both drivers scoring their maiden podium finish in the championship. Ben Hingeley (Hitech Bullfrog GP), Enaam Ahmed (Hitech Bullfrog GP), Jehan Daruvala (Carlin), Julian Hanses (ma-con), Ralf Aron (PREMA Theodore Racing), Robert Shvartzman (PREMA Theodore Racing) and Mick Schumacher (PREMA Theodore Racing) completed the top ten.
Sacha Fenestraz (Carlin): “I still can hardly believe that I have won here. It is only my second race in a Formula 3 car at Pau and this race wasn’t particularly easy, especially with rain setting in around the halfway point. Now, I am simply just happy. A particularly nice thing is that part of my family comes from Pau and that I am getting a lot of support here. In this race, there was a critical moment for me when I had contact with Fabio Scherer. After that, I was initially worried that my car could have been affected, but fortunately, that wasn’t the case.”
Alex Palou (Hitech Bullfrog GP): “My start wasn’t too good, but I managed to stay out of all the action in the first corner and thus moved up to third place. Then I tried to overtake Fabio, but he successfully defended. In the process, we tangled, which caused slight damage to my front wing. On the following laps, that wasn’t too big of a problem for me, my car was very good throughout the race. I notice that I am getting better from one session to another here in Pau, similarly to my teammates. Perhaps, we can move up even further in the third race.”
Marcus Armstrong (PREMA Theodore Racing): “My start was okay, not particularly good, but not particularly bad either. In turn 1, I then managed to take fourth place. After Fabio crashed into the barriers and slid back onto the track, he almost collected me. From that point of view, I was lucky to be on the podium in the first place.”