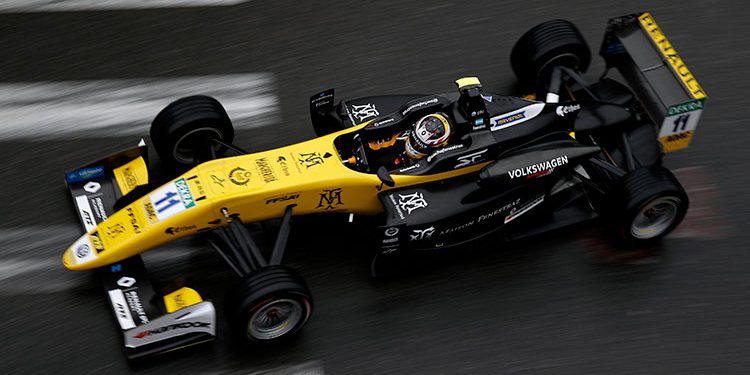 In second qualifying of the FIA Formula 3 European Championship at the 2.76 kilometres long street circuit in Pau in the south of France, rookie driver Sacha Fenestraz (Carlin) came out on top on a rain-soaked track and secured pole position for the second race of the season. Behind him, Alex Palou (Hitech Bullfrog GP) will be starting from second place with Enaam Ahmed (Hitech Bullfrog GP), Fabio Scherer (Motopark), Ben Hingeley (Hitech Bullfrog GP) and Marcus Armstrong (PREMA Theodore Racing) next up. Thus, rookie drivers claimed five of the first six places. In the ranking of the second-fastest laps, Ahmed was unbeatable. As a result, he will be on the best starting grid position for the third race of the weekend. Palou, Ralf Aron (PREMA Theodore Racing), Scherer, Jehan Daruvala (Carlin) and Daniel Ticktum (Motopark) will be lining up behind him.
Like the first session on the previous day, second qualifying of the FIA Formula 3 European Championship at the short street circuit of Pau was also held in two groups. This time, the drivers’ standings after the first race was used to determine the allocation to the two groups: drivers in odd positions in the standings (first, third, fifth etc.) were in group A, drivers with even positions (second, fourth, sixth etc.) qualified in group B.
Starting grid race two
On a wet track, group B drivers got the action underway and with his final flying lap, Sacha Fenestraz (1m23.620s) moved up into first place. In a thrilling qualifying, Enaam Ahmed (1m23.623s), Ben Hingeley (1m23.912s), Jehan Daruvala (1m24.101s), Jonathan Aberdein (Motopark, 1m24.181s) and Ralf Aron (1m24.359s) were classified in the following positions.
In group A, nobody was faster than Alex Palou (1m25.104s). The Spaniard managed to counter successfully after a late challenge by Daniel Ticktum (1m25.811s) for first place. Fabio Scherer (1m25.592s) was classified second from Marcus Armstrong (1m25.649s), Julian Hanses (ma-con, 1m25.786s), Ticktum and Ferdinand Habsburg (Carlin, 1m26.339s). As the fastest driver in group A didn’t match the lap time by Fenestraz as the pace-setter in group B, Fenestraz will be starting on pole position for the second race.
Starting grid race three
In the FIA Formula 3 European Championship, the second-fastest lap of each driver in second qualifying is used to determine the starting grid positions for race three. In this ranking, Ahmed (1m24.138s) was the fastest in his group B ahead of Aron (1m24.385s), Daruvala (1m24.393s), Fenestraz (1m24.512s), Aberdein (1m24.733s) and Robert Shvartzman (PREMA Theodore Racing, 1m24.956s). In group A, Palou (1m25.200s) came out on top from Scherer (1m25.707s), Ticktum (1m26.066s), Armstrong (1m26.242s), Marino Sato (Motopark, 1m26.505s) and Mick Schumacher (PREMA Theodore Racing, 1m26.886s). As Ahmed’s lap time was faster than Palou’s, the first-placed in group A, the Brit will be starting from pole position for race three.
Sacha Fenestraz (Carlin): “Being on pole position at Pau is unbelievable. This is only my second race meeting in the FIA Formula 3 European Championship and this was the first time for me driving a Formula 3 car at Pau in the rain. It wasn’t easy, but my team did a great job and I completed a great final lap. Now, I am massively looking forward to tomorrow’s race, in particular as it is in my home country and I am getting a lot of support.”
Enaam Ahmed (Hitech Bullfrog GP): “This is my first time ever in Pau and then it is raining to make it even more difficult. However, I have to admit that this track wasn’t as frightening in the rain as some of the circuits in my home country England. Today, I tried to drive as fast as possible and stay away from the barriers. That it was actually enough to be on pole position comes as a surprise to me and, of course, I am very happy with it.”