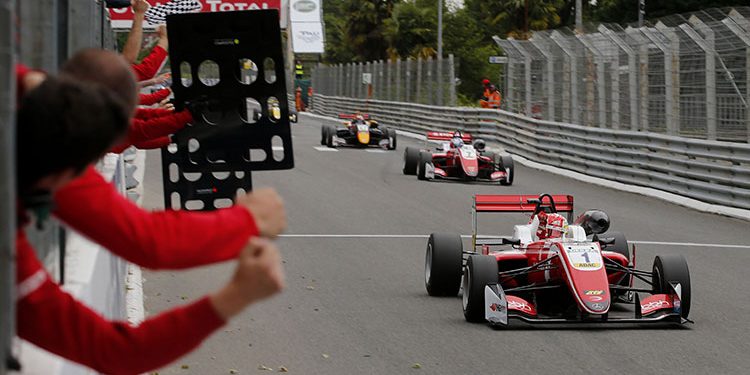 Chinese driver Guanyu Zhou (PREMA Theodore Racing) collected the first winner’s trophy in the 2018 FIA Formula 3 European Championship. Zhou, a member of the Ferrari Driver Academy for many years, took the lead at the start and won after 24 laps from Ralf Aron (PREMA Theodore Racing) and Red Bull junior driver Daniel Ticktum (Motopark). At the 2.76 kilometre long street circuit of Pau, Sacha Fenestraz (Carlin), the only Frenchman in the field, was classified fourth and the best-placed rookie. Fellow rookies Marcus Armstrong (PREMA Theodore Racing) and Enaam Ahmed (Hitech Bullfrog GP) rounded out the top six.
Daniel Ticktum started the race from pole position, but it was Guanyu Zhou who pipped him at the start and the Brit slotted into second place. In the opening stages, Ralf Aron was third ahead of Robert Shvartzman (PREMA Theodore Racing). On lap four, a ‘full course yellow’ (FCY) was called by race control after a crash by Devlin DeFrancesco (Carlin). During a FCY, the drivers have to reduce their speed and keep the gap to the driver in front of them consistent.
The drivers just having returned to racing speed, Ferrari protégé Shvartzman dropped back to ninth, which made Renault junior Sacha Fenestraz, now in fourth position, the best-placed rookie. Almost at the same time, a crash by Ben Hingeley (Hitech Bullfrog GP) prompted the first safety car intervention.
At the start of lap nine, racing resumed and Aron used the situation to overtake Ticktum. Only one lap later, Mick Schumacher (PREMA Theodore Racing) and Fabio Scherer (Motopark) collided, causing Schumacher to drop back to 19th and Scherer to 15th place. Just before the end of the race, Keyvan Soori Andres (Van Amersfoort Racing) hit the barriers from twelfth place and thus caused the second safety car procedure.
Once this was over, Fenestraz mounted a final challenge on Ticktum for third, but the Brit successfully defended his position. As there were no changes up front, Zhou scored his maiden victory in the FIA Formula 3 European Championship from Aron, Ticktum and Fenestraz. Behind Marcus Armstrong and Enaam Ahmed, Alex Palou (Hitech Bullfrog GP), Robert Shwartzman, Marino Sato (Motopark) and Jüri Vips (Motopark) rounded out the top ten. Mick Schumacher eventually crossed the finish line in 15th.
Guanyu Zhou (PREMA Theodore Racing): “I had a good start of the race. After that, I only had to be careful to stay in the lead at the restarts. Being the first Chinese driver to win a single-seater race in an FIA championship is a great feeling. I am very happy about this.”
Ralf Aron (PREMA Theodore Racing): “As we know that this tight street circuit hardly provides any opportunities for overtaking, I fully concentrated on the restarts. During my attack on Daniel Ticktum, there was even some slight contact with Daniel’s car, but I didn’t consider it as a problem. Second place is a good start of the new season.”
Daniel Ticktum (Motopark): “I am not happy at all, because when starting from pole position, you don’t want to finish third. My main problems were the start and the restarts. Next time, I will do it better.”